The Uyghur Genocide—The World is Not Watching 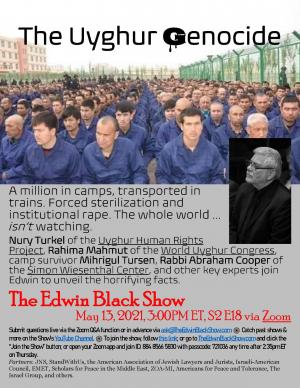 Raphael Lemkin coined and began the process of defining the term “genocide” in 1944, while the outcome of WWII was not yet certain. Its definition, as adopted by the UN in 1948 includes: “… deliberately inflicting on the group conditions of life calculated to bring about its physical destruction in whole or in part; imposing measures intended to prevent births within the group; and forcibly transferring children of the group to another group.”

The Chinese government has imposed IUDs, sterilizations, and and other population control measures on Uyghur women and families.

Manufacturers worldwide, plus the Chinese government, are using forced Uyghur labor. The products of Uyghur and other minority forced labor are all through the global supply chain, especially solar panels. (VW has proffered a defense (via the BBC)).

Another survivor's story plus a history: https://www.newyorker.com/magazine/2021/04/12/surviving-the-crackdown-in-xinjiang.

In June 2020, the US passed the Uyghur Human Rights Policy Act, and the US plus Canada, Britain, and the EU have imposed sanctions on Chinese government officials in response.

A June 2021 report by by Oxus Society for Central Asian Affairs and the Uyghur Human Rights Project details how various Muslim countries have cooperated with China to “surveil, detain, and repatriate Uyghurs and other Muslim minorities from China who have fled Xinjiang.”

A rally in support of Uyghurs and other ethnic minorities in China was held on October 1, 2021 at the Lincoln Memorial.

Enes Kanter, who plays for the Boston Celtics, has been frequently critical of China policy towards its religious ethnic minorities, and has demanded they stop harvesting organs from Uyghurs, Tibetans, Christians, and others in camps.

A Marriott in Prague declined to host a conference of Uyghur activists on "political neutrality" grounds; Marriott International officials have since apologized.

In early December 2012, the US House of Representatives passed a bill banning the import of goods produced by Uyghurs in forced labor camps, and President Biden signed the bill into law on December 23.

Zumrat Dawut tells her story of the crackdown, her imprisonment, and her escape. It was published in illustrated form in December 2021.