Edwin Black, who originated International Farhud Day and is the New York Times bestselling author of The Farhud: Roots of the Arab-Nazi Alliance in the Holocaust, is joined by Rabbi Abraham Cooper of the Simon Wiesenthal Center, Lyn Julius of HARIF, Rabbi Elie Abadie, Council of Sages, UAE, Zalmi Unsdorfer of Likud UK, and other leading voices to ask the uncomfortable questions. 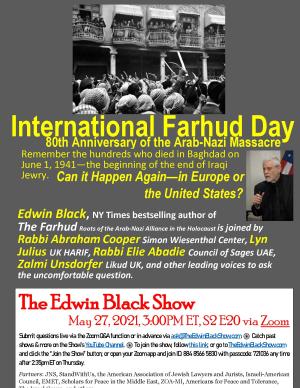 International Farhud Day was first recognized at a special event held at UN HQ and streamed across the world on 1 June 2015. The event featured Alyza Lewin, David Roet, then Deputy Permanent Representative of the Israel Mission to the UN, Rabbi Elie Abadie, Malcolm Hoenlein, and a keynote Lecture by Edwin Black: “The Farhud and the Creation of 850,000 Post-War Refugees From Arab Lands.”

In May 2021, thousands around the world lit virtual candles in remembrance of the 80th anniversary.

May 2021 also saw outbreaks of pro-Palestinian violence against Jews In Europe and the United States. Here is one such, from London.