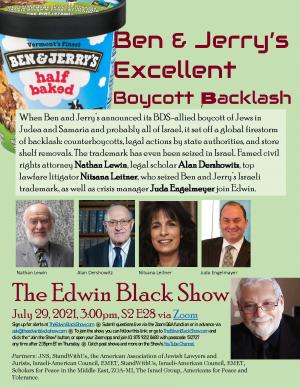 Ben & Jerry’s Israeli trademark has been seized and re-registered in Judea and Samaria by a lawfare group, read it here. Shurat HaDin Law Center, an Israeli NGO, has registered a trademark for a Ben & Jerry's knockoff, per the Jerusalem Post. JNS reports more on this, with a headline predicting that B&J’s will “regret the day they boycotted Israel.”

An employee who resigned after Ben & Jerry's anti-Jewish boycott says the board was in touch with leading BDS figures before the boycott was announced.

6 Jun 2022
While the NY State Comptroller has removed $100M-plus in Unilever holdings from the state pension fund, activists including the ZOA and Americans against Antisemitism are asking Governor Kathy Hochul why she has not yet followed through [PDF] on a statewide divestment.