Barnes & Noble hosts a special launch event for IBM and the Holocaust—the 2021 re-issue of the hardcover in a special 20th Anniversary Commemorative Edition, available exclusively at Barnes and Noble. Sharon Polsky, president of the Privacy and Access Council, and Chris Lovett, professor of history at Emporia State University plus other top experts confront the historical genocide and the looming future threat. Join the launch and ask questions.

In his New York Times bestselling investigative book, Edwin Black documented how IBM knowingly organized all six phases of Hitler’s Holocaust: identification, exclusion, confiscation, ghettoization, deportation—and even extermination. The book was exhaustively researched and its assertions are backed by a literal tower of documentation.

With more than 1.5 million copies in print, IBM and the Holocaust is in more than 20 languages in numerous editions in 190 countries. A copy sells every hour.

The book was published to global acclaim.
EXPLOSIVE AND STUNNING. An explosive book… Backed by exhaustive research, Black’s case is simple and stunning: that IBM facilitated the identification and roundup of millions of Jews during the 12 years of the Third Reich… Black’s evidence may be the most damning to appear yet against a purported corporate accomplice.
Michael Hirsh, Newsweek

BEYOND DISPUTE. Black clearly demonstrates that Nazi Germany employed IBM Hollerith punch-card machines to perform critical tasks in carrying out the Holocaust and the German war effort. He goes on to document that IBM managed to profit from Hitler’s state throughout its existence … Black establishes beyond dispute that IBM Hollerith machines significantly advanced Nazi efforts to exterminate Jewry … IBM and the Holocaust is a valuable contribution to our understanding of the Holocaust.
Christopher Simpson, Washington Post Book World

SHOCKING. Thomas Watson chose to tabulate the Nazi census, to accept Hitler’s medal, and to fight for control of Dehomag. And he made other equally indefensible choices in his years of doing a profitable business counting Jews for Hitler—choices that are described in IBM and the Holocaust by Edwin Black. This is a shocking book. With the help of more than a hundred researchers working in archives in the U.S., Britain, Germany, France, and Israel, Edwin Black has documented a sordid relationship between this great American company and the Third Reich, one that extended into the war years.
Jack Beatty, The Atlantic

EXHAUSTIVE RESEARCH. With exhaustive research, Black makes the case that IBM and Watson conspired with Nazi Germany to help automate the genocide of Europe’s Jews … Black’s book is so enlightening [because] it paints a richly textured picture of how a man [Watson], and an entire company, can ignore all sense of morality while not once transgressing the lines of business ethics. If nothing else, this book should be required reading for every first-year MBA student.
Sam Jaffe, Businessweek

UNDENIABLE. Black's meticulous documentation reveals an undeniable fact: after the outbreak of the World War II, the IBM corporation knew the whereabouts of each of its European-leased machines, and what revenues it could expect from them … Now, the burden of proof rests squarely with IBM. What will it do with this thoroughly documented accusation, this long-overdue indictment of corporate greed? Black's book has done what US and international organs of justice chose not to do five decades ago.”
Prof Robert Urekew, Harvard International Review

The book has been the recipient of numerous awards, including two from the American Society of Journalists and Authors for Best Nonfiction Investigative Book of the Year and Best Article of Investigative Journalism on IBM at Auschwitz for “Final Solutions,” published in the Village Voice, Best Humanities Book, 2018 for the Chinese edition of IBM and the Holocaust, awarded by a joint committee of booksellers and information technologists in China, the Moral Compass Award granted by the Naples Holocaust Museum, and the Integrity Award from The American Jewish Congress.

A resurgence in popularity of the book in 2021 led to the re-issue of the special hardcover edition with dust cover, available exclusively at Barnes & Noble. 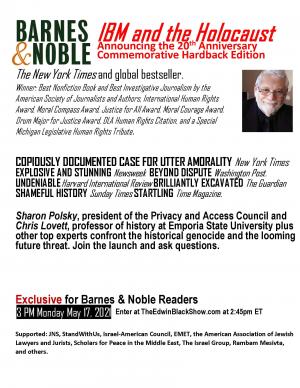 In the years since its publication, a few reviewers have falsely accused IBM and the Holocaust of being factually inaccurate. Here are some of their retractions, many of which were accompanied by donations to USHMM or Yad Vashem.