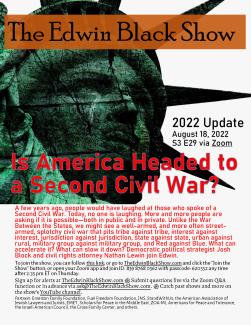 Is America Heading to a Second Civil War? 2022 Update

A few years ago, people would have laughed at those who spoke of a Second Civil War. Today, no one is laughing. More and more people are asking if it is possible—both in public and in private. Unlike the War Between the States, we might see a well-armed, and more often street-armed, splotchy civil war that pits tribe against tribe, interest against interest, jurisdiction against jurisdiction, state against state, urban against rural, military group against military group, and Red against Blue. What can accelerate it? What can slow it down? Democratic political strategist Josh Block and civil rights attorney Nathan Lewin join Edwin. 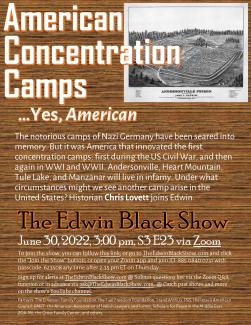 The notorious camps of Nazi Germany have been seared into memory. But it was America that innovated the first concentration camps; first during the US Civil War, and then again in WWI and WWII. Andersonville, Heart Mountain, Tule Lake, and Manzanar will live in infamy. Under what circumstances might we see another camp arise in the United States? Historian Chris Lovett joins Edwin for camps history and analysis, and constitutional law expert Nathan Lewin joins Edwin to discuss the end of the B&J's boycott and its associated lawsuit. 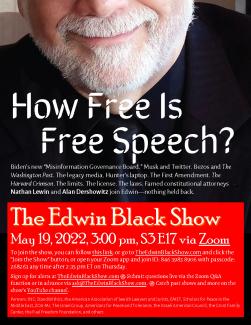 How Free Is Free Speech?

Biden’s new “Misinformation Governance Board.” Musk and Twitter. Bezos and The Washington Post. The legacy media. Hunter’s laptop. The First Amendment. The Harvard Crimson. The limits. The license. The laws. Constitutional attorneys Nathan Lewin and Alan Dershowitz join Edwin—with nothing held back.