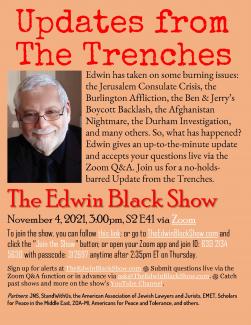 Updates from The Trenches

Edwin has taken on some burning issues: the Jerusalem Consulate Crisis, the Burlington Affliction, the Ben & Jerry’s Boycott Backlash, the Afghanistan Nightmare, the Durham Investigation, and many others. So, what has happened? Edwin gives an up-to-the-minute update and also accepts your questions live via the Zoom Q&A. Join us for a no-holds-barred Update from the Trenches. 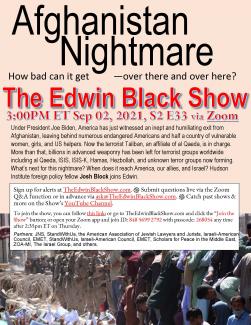 Under President Joe Biden, America has just witnessed an inept and humiliating exit from Afghanistan, leaving behind numerous endangered Americans and half a country of vulnerable women, girls, and U.S. helpers. Now the terrorist Taliban, an affiliate of al Qaeda, is in charge. More than that, billions in advanced weaponry has been left for terrorist groups worldwide including al Qaeda, ISIS, ISIS-K, Hamas, Hezbollah, and unknown terror groups now forming. What’s next for this nightmare? When does it reach America, our allies, and Israel? Hudson Institute foreign policy fellow Josh Block joins Edwin.