Deadly Vision: When Ophthalmology Teamed Up With Eugenics in America

For a time, and with a mad and twisted sense of medicine, ophthalmologists, from the United States to Nazi Germany, believed the best path to better vision for humanity was to eliminate the existence all of those who wore glasses. Based on a seminal chapter in Edwin Black’s prize-winning bestseller War Against the Weak. 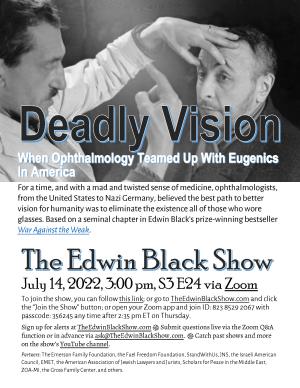 Today’s introductory topic concerns the July 14 joint US–Israel declaration that includes a commitment to ongoing cooperation and to "never allow Iran to acquire a nuclear weapon.”

This episode is based on Chapter 8, "Blinded."

… To set a medico-legal precedent that could be broadly applied to all defectives, eugenicists rallied behind the obviously appealing issue of blindness. Who could argue with a campaign to prevent blindness?

Eugenicists, however, carefully added a key adjective to their cause: hereditary. Therefore, their drive was not to reduce blindness arising from accident or illness, but to prevent the far less common problem of “hereditary blindness.” How? By banning marriage for individuals who were blind, or anyone with even a single case of blindness in his or her family. According to the plan, such individuals could also be forcibly sterilized and segregated—even if they were already married. If eugenicists could successfully lobby for legislation to prevent hereditary blindness by prohibiting suspect marriages, the concept of marriage restriction could then be broadened to include all categories of the unfit …