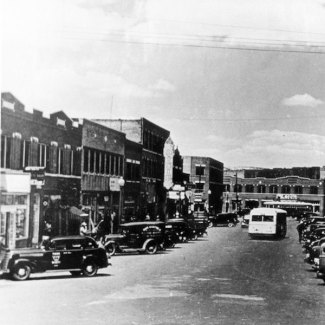 The original definition of pogrom—погром: “an organized massacre in Russia for the destruction or annihilation of any body or class: orig. and esp. applied to those directed against the Jews.” Its definition has since come to encompass acts of “organized, official violence against a group of people for racial or religious reasons.”

In Tulsa, records were removed from newspaper and state archives—erasing history and giving cover to the perpetrators. Articles from the History Channel, the LoC, and JSTOR Daily provide solid histories of the Massacre and its legacy, including that of the inflammatory contemporaneous coverage and of the coverup. In 2001, the Oklahoma Commission to Study the Tulsa Race Riot of 1921 issued a report titled “Tulsa Race Riot.”

The New York Times built a 3-D interactive model of the neighborhood before its destruction; the Smithsonian holds a recently-rediscovered first-person account. The massacre included a milestone not exactly to be celebrated: this was the first time that bombs were dropped from a plane onto a US city. Ironically, segregation was a contributing cause to Greenwood’s prosperity; white-owned banks and shops did not do business with Tulsa's Black community, so they established their own professional class, banks, and shops. By denoting it a riot, the authorities further closed off redress for the survivors—riot damage is not covered by insurance.

Many wondered if the Tulsa depicted in the 2019 Watchmen series had been invented for the backstory. It was not.

Tulsa was neither the first nor the last American Pogrom, nor were Black Americans the sole targets. Native Americans; Chinese immigrants; striking workers; Catholic people—any group could abruptly find itself on the receiving end of mass violence, often ignited by lies and accelerated by sensationalized newspaper coverage. Eleven Italian Americans were lynched in New Orleans in March 1891 by fellow residents dissatisfied with their acquittal on murder charges.

Many of the 19th- and early 20th-century incidents, e.g., Wilmington, North Carolina, 1898, were bloody backlashes to Reconstruction and emerging Black political participation. Some of them, e.g., Ocoee, Florida, Election Day, 1920, erased entire neighborhoods and towns from the map. The perpetrators were rarely if ever held to account; in most cases, the victims were deemed responsible.

Twenty years later and 7,000 miles away, the Muslim residents of Baghdad and other Iraqi cities would descend upon their Jewish neighbors in a chillingly similar episode of violent dispossession—the Farhud. That these events happened exactly 20 years apart is undoubtedly coincidental, as the the Farhud was timed to Shauvot. But the violence and the perpetrators would have known each other.