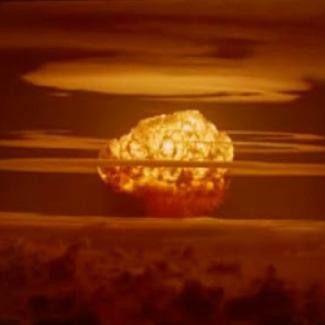 Since the development of the Bomb, this terror weapon has been deployed in warheads of varying sizes. On the smaller side, while a nuclear hand grenade remains in the realm of speculative fiction, the US did develop the human-portable SADM (Special Atomic Demolition Munition), 12" x 18" (305mm x 457mm) and weighing in at 70 lb (32 kg), with an estimated yield of up to 1 kT. The US also developed and tested a nuclear-tipped artillery system, code-named Davy Crockett. It was designed to deliver W54 warheads with an estimated yield of 20 T (not kT).

The first on-land test series with personnel nearby was conducted beginning in November 1951 at the Nevada test site, code-named Buster-Jangle. The "Dog" test had the weapon dropped from a bomber and detonated at an altitude of 1,417 ft (432 m). Some 6500 troops were stationed 6 mi (9.7 km) from ground zero, and after the explosion were ordered to move towards the detonation site.

During the heyday of testing, tourists frequently visited Las Vegas to watch test shots. From 1951 to 1962, the US conducted some 100 above-ground tests at the Nevada Test Site.

The first hydrogen or thermonuclear bomb—a fusion explosion set off by a fission-bomb trigger—was code-named Ivy Mike and detonated November 1, 1952 on an island in the Enewetak Atoll. Its yield was 10.4 MT. UK veterans of Pacific testing recount their experiences.

From 1985 to 2005, the US maintained 50 LGM-118 Peacekeeper aka MX missiles. Each of these MIRV ICBMs was equipped with ten 300 kT W87 warheads. Their purpose was to leave the US with retaliation capability in the case of a surprise attack. They were retired in 2005 as part of arms reduction agreements.

The highest-yield bomb ever detonated, at 50 MT, was the USSR’s “Tsar Bomba” in 1961. The bomb was dropped by parachute from a Tu-95V and detonated 4 km (2.5 mi) above Novaya Zemlya. In August 2020, Russia released previously-classified footage of that test.

The FAS has published its 2022 report on the status of the world's nuclear forces.

Since 2012, Alex Wellerstein has been maintaining Nukemap (mirror), which allows one to map the effects—destruction, burns, radiation exposure, fallout, et cetera—of a nuclear explosion on a chosen location. One can select yield, ground or air burst, and several other variables.