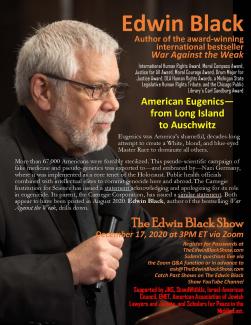 Eugenics was America’s shameful, decades-long attempt to create a White, blond, and blue-eyed Master Race to dominate all others. More than 67,000 Americans were forcibly sterilized. This pseudo-scientific campaign of fake medicine and pseudo-genetics was exported to-and embraced by-Nazi Germany, where it was implemented as a core tenet of the Holocaust. Public health officials combined with intellectual elites to commit genocide here and abroad. The Carnegie Institution for Science has issued a statement acknowledging and apologizing for its role in eugenicide. Its parent, the Carnegie Corporation, has issued a similar statement. Both appear to have been posted in August 2020. Edwin Black, author of the bestselling War Against the Weak, drills down.