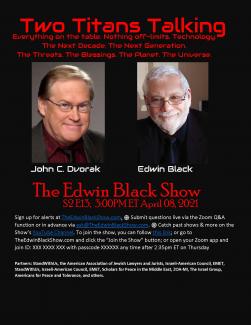 John C. Dvorak is a titan in computer journalism. He shaped a generation of computer writers in Forbes, Infoworld and PC Magazine. The Computer Press Association awarded him Best Columnist and Best Column awards. The American Business Editors Association gave him the national gold award for best online columns. Now John joins Edwin in a Two Titans session. Everything on the table. Nothing off-limits. Technology. The Next Decade. The Next Generation. The Threats. The Blessings. The Planet. The Universe.