A sinister attempt in California to indoctrinate high school students with anti-Jewish and anti-Israel “values,” fought for years, may succeed—and then spread to school districts across the country. Max Samarov, director of research at StandWithUs, Tammi Rossman-Benjamin, director of the Amcha Initiative, and Melissa Landa, founder of Alliance4Israel, as well as other leading minds join Edwin to investigate the dimensions of the danger. 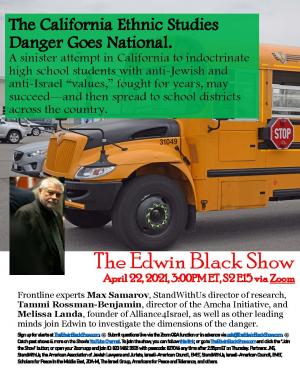 On February 3, 2021, several members of the CDE’s ESMC 2019 Advisory Committee sent a letter requesting, for a variety of reasons, that their names be immediately removed from the Acknowledgements section of the ESMC. This letter was also posted by the Save Arab-American Studies Coalition.

In 1969, the Third World Liberation Front (twLF), a UC Berkeley student movement, helped establish Ethnic Studies as an interdisciplinary field in the US. They observed their 50th anniversary during the 2018–19 academic year, hosted online by UCB’s Center for Race and Gender.

The Liberated Ethnic Studies Model Curriculum Institute has its opened its own website.