Ford and the Nazis

When America’s most active Jew hater and the world’s most dangerous Jew hater made common cause … the result was measured in the millions. Holocaust historian Max Wallace and automotive historian Marc Rauch join Edwin. 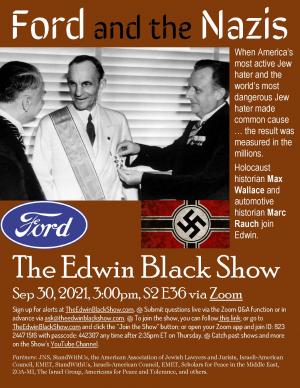 Henry Ford received the Nazis’ highest honor that could be awarded to a non-German, The Grand Cross of the German Eagle,in Detroit on July, 30, 1938 from Karl Kapp, German consul in Cleveland and Fritz Heiler, left, German consul in Detroit.

Henry Ford used The Dearborn Independent to publish a pamphlet series titled The International Jew: The World’s Foremost Problem, which he had translated into 12 languages and made available throughout North America and Europe. Its contents relied heavily The Protocols of the Elders of Zion, the part-plagiarized, part-fabricated, entirely fictional product of Jew-hating Russian newspaper editors, one of whom had been a key instigator of the 1903 Kishinev pogrom.

The Fall 2018 issue of the city-owned Dearborn Historian included a piece looking back on Henry Ford's antisemitism—and the mayor of Dearborn attempted to prevent its publication, confiscating all the copies of the issue and firing the editor.